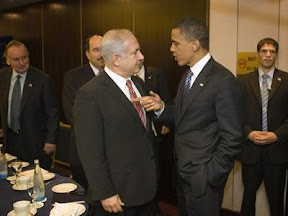 President Barack Obama and Prime Minister Benjamin Netanyahu will meet on March 5th. Reportedly, Obama will yell and scream make a final pitch to deter Israel from attacking Iran. The official administration position is it would be imprudent of Israel to attack Iran at this time. I wonder if it would be more prudent if it was Washington that faced the possibility of having a mushroom cloud over it?


The March 5 meeting in Washington between President Barack Obama and Prime Minister Benjamin Netanyahu may be the final attempt on the part of the US to bring Israel around to its position on the global efforts to curb Iran’s nuclear ambitions.

President Obama’s National Security Adviser Tom Donilon concluded three days of talks with the Prime Minister and other Israeli leaders in Jerusalem Monday, in the midst of a brewing Israeli push for a military end to Iran’s nuclear plans. Donilon conducted a caustic, 2 hour conversation with Netanyahu Sunday, in which the two disagreed radically on the ways to deal with Iran’s progress in enriching uranium and the relocation of its nuclear production to underground sites.

Monday’s statement from the White House said that Donilon and the U.S. delegation discussed “the full range” of mutual security concerns, and that the visit was “part of the continuous and intensive dialogue between the United States and Israel and reflects our unshakable commitment to Israel’s security.”

Donilon was only the latest American official to meet with Netanyahu and with Defense Minister Ehud Barak, after the chairman of the U.S. joint chiefs of staff Gen. Martin Dempsey January visit to Israel. Dempsey said on CNN Sunday that an Israeli attack on Iranian nuclear facilities would be “destabilizing,” and that such a move wouldn’t be “prudent at this point.”

I'd MUCH rather Israel took care of this issue, and leave us OUT of it.

And they will, I believe with or without the US support they deserve.

It looks like they are making it harder. I can't do the captcha ones many websites use. :(