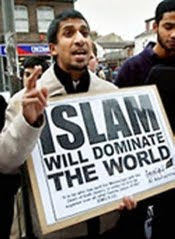 
Having swept into majorities in Egypt’s parliament, a Muslim Brotherhood spokesman is making it clear the group has ambitions far beyond Cairo.

“Concerning the Islamic caliphate, this is our dream, and we hope to achieve it, even after centuries,” Brotherhood spokesman Mahmoud Ghuzlan told Egypt’s Ahram news outlet in an interview Sunday. “It is the right of the Brotherhood that this is one of the pillars of its strategy. We are not concerned about the renaissance of the group only. Rather our first goal is the renaissance of Egypt, then the Arab world and then the Islamic world. This will come gradually.”

Ghuzlan’s statement echoes comments Brotherhood Supreme Guide Mohammed Badie made during a speech in late December. In it, Badie explained Brotherhood founder Hassan al-Banna’s original agenda remains intact. “It begins with the reform of the individual and then to start building the family and society, then the government; then the rightly guided caliphate, then instructing the world; instructing guidance, wisdom, truth and justice.”

Neither Badie’s comments nor Ghuzlan’s interview have been picked up by American news media.