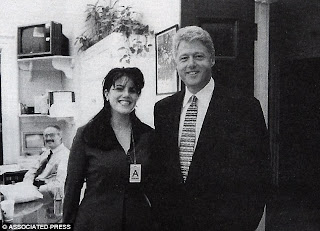 Former President Bill Clinton is a slime ball. Anything Monica Lewinsky does to him is well deserved...


Monica Lewinsky is reportedly set to write a tell-all book about her affair with Bill Clinton - including her intimate love letters to the ex-president and how he had an insatiable desire for threesomes.

The former White House intern, 39, reportedly wants revenge on Clinton, who she believes escaped unscathed while she has never been able to shake the disgrace of their Oval Office trysts.[...]

'Monica has tried to move forward, but the nightmare of her affair with Bill still haunts her,' a friend told the Enquirer. 'She’s facing 40 without a man in her life, and seething about the way her reputation was destroyed as the whole world watched.'[...]