John Kerry: Deaths In Benghazi The Result Of GOP Budget Cuts Or Something… 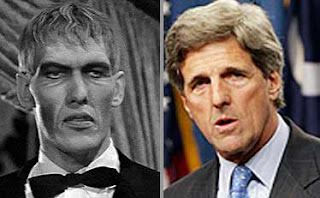 Lurch has a bolt or two loose...


John Kerry has been trying to think like Mitt Romney as he stands in for the Republican nominee in presidential debate prep with Barack Obama. But in an interview on Tuesday, Kerry said it’s not easy to follow Romney’s train of thought on foreign policy.

“Romney has made clear that not only does he not have the judgment or vision’’ to be commander-in-chief, said the ’04 Democratic nominee, who chairs the Senate Foreign Relations Committee, “but he’s really been all over the map” on Afghanistan and more. [...]

Asked about reports that the security at the consulate in Benghazi was seriously sub-par, though, Kerry made his own accusations: “The answer is, look at who the people are around here who’ve been cutting the budget; Hillary’s been up here and I’ve been screaming about it and Dick Lugar, to his credit,” has been, too.