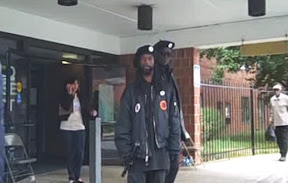 Did I say New Black Panthers? I meant to say Tea Party...


“I know everyone’s paying attention, I know the Obama campaign is ready to act on this. But I realized that there are two important federal laws, the Voting Rights Act, passed in the 60s, and Voter Registration Act passed in the 90s, that have criminal and civil penalties for people who try to intimidate a voter. And I wanted to make sure that the Justice Department is moving on these cases. So I did hear from them today, and although they can’t confirm or deny any particular case because I wrote about Ohio, they did say that they had opened up 42 investigations this year, which is good to know,” Sen. Barbara Boxer (D-California) told MSNBC’s Ed Schultz on Friday.

“They are pursuing, enforcing these laws, and they said I could say that anyone within the sound of my voice, anyone in this country who feels they’re being intimidated can call their nearest FBI office because it is a federal offense to harass someone, to intimidate someone. Think about all the people that worked so hard and struggled and went to prison and put their life on the line for the right to vote,” Boxer said.