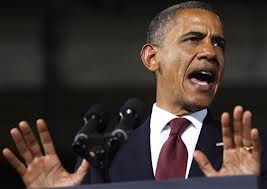 Even young veterans are dumping Obama...


President Barack Obama is trying hard to win veterans, but it looks like they’d prefer a new commander in chief.

The Obama campaign had been hoping that veterans and their families — especially among the post-Sept. 11 generation that served in Iraq and Afghanistan — would be part of their path to victory: They’re a high turn-out demographic and concentrated in battleground states, with nearly 1 million each in North Carolina, Ohio and Virginia, and 1.6 million in Florida.

But recent polls make clear that the president’s campaign is losing the battle. Even as Obama leads in Colorado, Florida, Ohio and Virginia, Mitt Romney is up by double digits among veterans in those states. Nationwide, he’s got a commanding 20-percentage-point lead over Obama and has even overtaken the president with younger veterans.

“It’s no contest,” said Maurice Tamman, a Reuters data news editor who has polled on veterans and the presidential campaign.