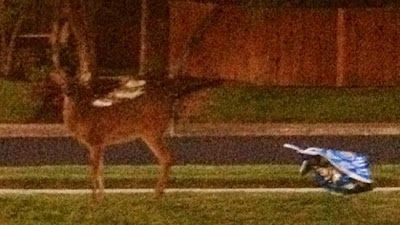 Tom and Beth Priem said concern over repeated tears in an Obama lawn sign in their front yard led to concern about vandals, KXAN.com reports. Beth Priem sat up one morning with a video camera hoping to catch the culprit and discovered the problem was actually something with four legs.

“Apparently, we have a Republican deer in our neighborhood!” said Tom.  Read more here.

I heard about that, it never touched the Romney signs in the nieghborhood.