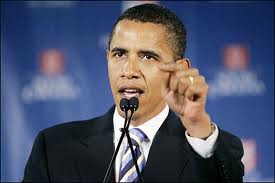 Barack Obama needs to man-up and accent some of it...


In a sit down interview with late night host David Letterman that will be aired later this evening, President Barack Obama continued a trend of blaming others for the problems this country faces.

“There’s more than enough blame to spread around,” Obama told Letterman, according to the pool report. “These problems have been around for a decade or more.”

The president’s statement was in response to this (from the pool reporter): “Letterman lingered on a number of serious topics, asking Obama to explain the nation’s budget crisis at length and to comment on the gridlock that much of the nation sees in Washington.”

And here's some late nite COMEDIAN asking the President of the United States the questions he should be answering every day.

I didn't see the show, but I'd bet Letterman made a joke out of every answer Obama gave. so as to minimize the answer.

I'd love to see the President sit down and answer questions from Judge Napolitano.

But he won't, cowards have no backbone.