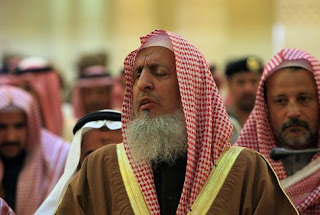 Will they cut off the tongues of blasphemers?


The Kingdom’s Grand Mufti Sheikh Abdul Aziz Al-Asheikh called on the international community to criminalize acts of abusing great prophets and messengers such as Abraham, Moses, Jesus and Muhammad (peace be upon them all), according to a statement issued today.

The statement was issued in response film in the United States denigrating Islam and ridiculing the Prophet (pbuh).

Al-Asheikh also appealed to the Ummah to react to any attempt to denigrate Prophet Muhammad (pbuh) by strictly adhering to the values advocated by the Prophet (pbuh) instead of unleashing violence against innocent people, the Saudi Press Agency reported.

The mufti said the attempts of a filmmaker filled with hatred to Islam would not harm the great personality of the Prophet (pbuh) or anything in Islam in any manner but would only reflect on the people who spread venomous ideas.

We know that Obama and Hillary would love to have one too.

Blasphemy against Islam will be the only thing enforced, of course.

Then again, who is going to enforce it?