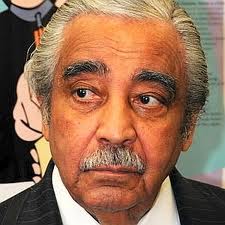 NY Rep. Charles Rangel does realize he is making himself look like a jack ass, doesn't he?

The 82-year-old’s umbrage came in a tweet while he was in the Cannon Rotunda interview area. According to a picture he also tweeted, he was near House Majority Leader Eric Cantor who was in a discussion over the Bush tax cuts.

His picture shows Rangel waiting to be interviewed with Cantor off to the right, TV light shining off his face as he is being interviewed.