Mitt Romney: If the Prime Minister (of Israel) wanted to meet with me I can’t ever imagine saying no.” 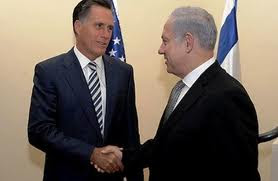 If Obama won't meet with Prime Minister Netanyahu, Romney should fly to New York while he is here and meet him.

WASHINGTON POST: While greeting supporters in Jacksonville, Fla. after his press conference on the attacks in Egypt and Libya, Mitt Romney took a subtle swipe at President Obama’s relations with Israel.
“I can’t ever imagine if the Prime Minister of Israel asked to meet with me, I can’t imagine ever saying no,” Romney said when asked about Israel, according to a pool report. “They’re our friends. They’re our closest allies in the Middle East.”. . . Read More

Romney on Netanyahu: "If the Prime Minister wanted to meet with me I can’t ever imagine saying no.”
— toddstarnes (@toddstarnes) September 12, 2012