Madonna promises to strip naked if Obama is re-elected... 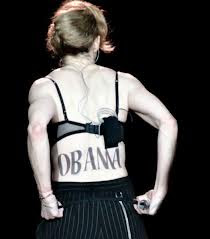 Finally, we know why Bill Clinton is trying to get Obama re-elected...


Later in the show, Madonna took off her shirt and pulled down her pants to show she had “OBAMA” written in all capital letters across her lower back.

“When Obama is in the White House for a second term I'll take it all off,” she said to cheers and whistles from the audience.

She then began singing a slow, seductive version of “Like a Virgin” while rolling around on a piano top.

Madonna first revealed her body art in early September, during her performance at Yankee stadium in New York.