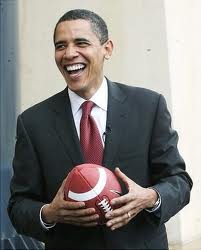 
President Obama is very accessible to the White House press corps, if the topic is sufficiently unimportant.

Obama has been criticized at times for avoiding the White House press while trolling entertainment media for positive coverage, but he took a moment to comment again on the National Football League referee fiasco upon his return to the White House today.
“Terrible,” Obama said of last night’s Packers-Seahawks game as he exited his helicopter.  “I’ve been saying for months, we’ve gotta get our refs back.” The NFL is using replacement referees while trying to negotiate a new contract with the referee union.

The press pool noted that Obama stopped to take the question after ABC’s Devin Dwyer shouted “Packers” at him over the sound of the helicopter “and that word alone was enough to make Obama stop to talk to press for a few seconds.”