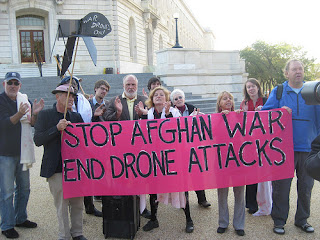 I wouldn't be shocked if they were kidnapped and beheaded for being infidels. I wonder if they are taking their vagina suits?


USA 26 September 2012: Seven Members of Veterans For Peace are part of a 40-member delegation organized by Code Pink and planning to be in Pakistan between September 28th and October 10th. VFP members Leah Bolger, Dave Dittemore, Bill Kelly, Jody Mackey, Rob Mulford, and Ann Wright will meet with drone victims’ families, elected officials, tribal elders, and residents of South Waziristan, where U.S. drone strikes have killed thousands, while injuring and making refugees of many more. Code Pink’s Medea Benjamin is an associate member of VFP.

VFP President Leah Bolger said, “The use of combat drones is both immoral and illegal. They violate the sovereign airspace of countries that we have not declared war with, and have killed thousands of innocent civilians. Can you imagine how the American public would react if another country murdered our citizens with drones? The U.S. military favors the use of drones because they ‘save American lives’ — when will we start thinking of the lives of others as being as valuable as our own?”