Iranian President Mahmoud Ahmadinejad believes, after the election, President Obama will be more flexible on Iran getting nukes... 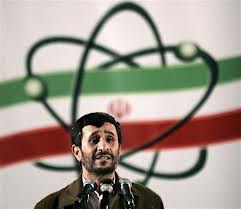 Obama more flexible after the election? I wonder where he got that idea?

Ahmadinejad suggested that Obama will give him more flexibility on the nuclear program after the American presidential election.

“Do you believe that he [Obama] will repeat such a policy?” Ahmadinejad said during a Washington Post interview this weekend. That was his reply when asked if Obama will reiterate his oft-stated position that “the U.S. is prepared to prevent Iran from gaining a nuclear weapon—that’s Obama’s ‘red line,’” as David Ignatius put it.

Yes, he is right.