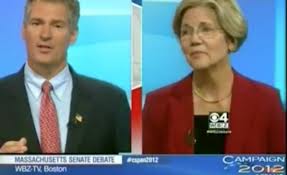 Fauxchahantas Elizabeth warren has a 1/32 chance of beating Scott Brown.


U.S. Sen. Scott Brown has moved into a narrow lead over rival Elizabeth Warren while his standing among Massachusetts voters has improved despite a year-long Democratic assault, a new UMass Lowell/Boston Herald poll shows.

The GOP incumbent is beating Warren by a 50-44 percent margin among registered Bay State voters, a turnaround from the last University of Massachusetts Lowell/Herald poll nine months ago that had the Democratic challenger leading by seven points. Among likely voters, Brown is leading the Harvard Law professor by a 49-45 percent margin, just within the poll’s 5.5 percent margin of error.

Howard;
I would like to talk to you about a business arrangement, but do not know how to contact you. Please email me at jimkar1@charter.net with instructions.
Thanks,

If Warren was leading by 6, the banner headline today would be: