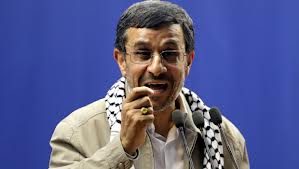 Why are we letting this maniac in our country? We should throw him and the entire UN out.


(Reuters) - Iranian President Mahmoud Ahmadinejad on Monday disregarded a U.N. warning to avoid incendiary rhetoric and declared ahead of the annual General Assembly session that Israel has no roots in the Middle East and would be “eliminated.”

On Sunday, U.N. Secretary-General Ban Ki-moon met with Ahmadinejad and warned him of the dangers of incendiary rhetoric in the Middle East.

Ahmadinejad did not heed the warning and, speaking to reporters through an interpreter, alluded to his previous rejection of Israel’s right to exist.

“Iran has been around for the last seven, 10 thousand years. They (the Israelis) have been occupying those territories for the last 60 to 70 years, with the support and force of the Westerners. They have no roots there in history,” he said, referring to the founding of the modern state of Israel in 1948.