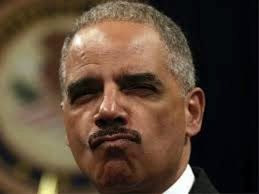 
FERUGUSON, Mo. — Attorney General Eric Holder on Wednesday told a group of black college students here that he had been a victim of racial profiling.
Holder, who is in Ferguson as part of the Justice Department’s investigation of the police shooting of an unarmed black teenager, relayed a story about being stopped on the New Jersey Turnpike despite not breaking any laws.
“He told the story about how he was humiliated. They got him out of his car and searched his car,” said Bradley J. Reyford, a 22-year-old student who met with Holder.
Holder told the story to a group of students at Florissant Valley Community College, a predominantly black school.
He met with a small group of students to hear their concerns about policing tactics in Ferguson, where riots and looting have broken out over the past week along with protests and demonstrations related to the killing of 18-year-old Michael Brown.