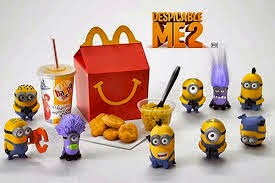 It's time for the government to mind it's own business, not ours.


A New York city councilman wants to ban toys in fast-food restaurant kid meals that do not meet strict dietary guidelines.
Democrat Ben Kallos introduced a bill Thursday that would ban the toys from a child’s meal if the food serving contains more than 500 calories and more than 600 milligrams of sodium.
The measure would also encourage including one half-cup of fruit or vegetables, or a serving of whole-grain products.
Under the proposal, violators would be fined between $200 and $500 for their first offense, no more than $1,000 for the second violation, and up to $2,500 for subsequent violations.
Former mayor Michael Bloomberg famously failed in his 2012 attempt to limit the size of giant sodas, so prospects are slim for Kallos’s measure.