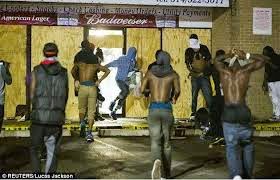 However you feel about Officer Wilson shooting Mr. Brown,it was shameful for rioters to loot and damage Ferguson businesses. they had nothing to do with it.

While liberals “leaders” were crowing for the cameras and pretending to pray, St. Louis conservatives were taking some positive steps toward actually helping the Ferguson community torn up by rioting.
The St. Louis Tea Party is organizing a “BUYcott” of businesses along the now-infamous Florissant Avenue where some of the worst looting took place.
It’s an idea that helps the people directly affected by the riots that followed the police shooting death of Michael Brown on Aug. 9, but it could also help change the media-generated image of the tea party nationally.
The national media, naturally, yawned, but the impact is real. And it’s still going on, with another event planned for this weekend.

Keep on reading
Posted by Bluegrass Pundit at 5:52:00 PM