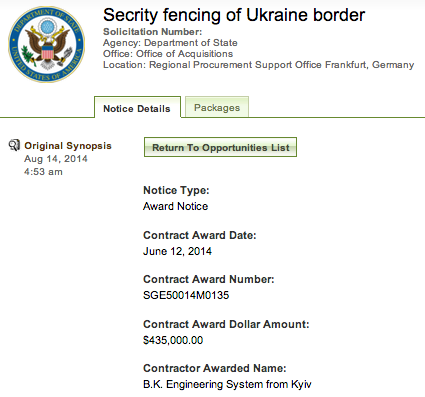 If Obama and democrats think fences don't work, why are we buying this one?


As part of the U.S. Crisis Support Package for Ukraine announced by the White House in April, the State Department awarded a $435,000 contract to B.K. Engineering System in Kyiv for razor wire to help “defend the newly imposed borders between Ukraine’s mainland and the Crimean peninsula.” The contract was awarded on June 12, but was just posted online this week.
An $8 million “non-lethal assistance” package was announced at the same time as a larger $50 million aid package for Ukraine to “help Ukraine pursue political and economic reform and strengthen the partnership between the United States and Ukraine.” The razor wire (Concertina) is included under “[e]ngineering equipment, communications equipment, vehicles, and non-lethal individual tactical gear for Ukraine’s Border Guard Service” that was spelled out in the April Fact Sheet. The contract notice posted online says:
Keep on reading…