Unlikely: Mitch McConnell promises to reign in Obama's policies or force a shutdown... 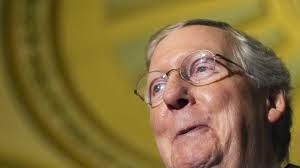 Is there a Republican or Independent in Kentucky dumb enough to believe this?  If you want to hold your nose and vote for McConnell to cause Harry Reid to become the Minority Leader, I understand. I won't be joining you. Just know what a spineless disingenuous jellyfish you are voting for.

HENDERSON, Ky. — Mitch McConnell has a game plan to confront President Barack Obama with a stark choice next year: Accept bills reining in the administration’s policies or veto them and risk a government shutdown.
In an extensive interview here, the typically reserved McConnell laid out his clearest thinking yet of how he would lead the Senate if Republicans gain control of the chamber. The emerging strategy: Attach riders to spending bills that would limit Obama policies on everything from the environment to health care, consider using an arcane budget tactic to circumvent Democratic filibusters and force the president to “move to the center” if he wants to get any new legislation through Congress.
In short, it’s a recipe for a confrontational end to the Obama presidency.
“We’re going to pass spending bills, and they’re going to have a lot of restrictions on the activities of the bureaucracy,” McConnell said in an interview aboard his campaign bus traveling through Western Kentucky coal country. “That’s something he won’t like, but that will be done. I guarantee it.” Read it all...