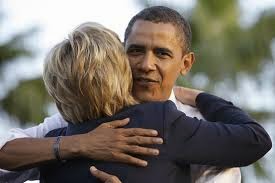 A civil war is breaking out in the Democratic Party...


Hug it out? Not a chance.
Despite widespread predictions that Hillary Clinton and President Obama would kiss and make up when they sat down at a friend’s birthday party on Martha’s Vineyard last week, sources inside the Clinton camp tell me that instead of a hug-a-thon the meeting turned into a tense, awkward freeze-a-thon.
Clinton was all smiles when she showed up at the Farm Neck Club in Oak Bluffs for the 80th birthday party for Ann Dibble Jordan, wife of Democratic Party muckety-muck Vernon Jordan.
Clinton was seated near Obama and joined him in a toast to the guest of honor, but she pointedly made no attempt to express her regrets or apologize for criticizing the president’s foreign policy.
During the evening, there was no mention of Hillary’s bombshell interview with The Atlantic in which she slammed the president’s foreign policy slogan “Don’t do stupid s–t,” saying he lacked the organizing principle of a great nation.
At the party, she and Bill Clinton went out of their way to ignore the president and first lady, who spent most of the evening on the dance floor avoiding contact with the Clintons.
Keep on reading…