Obvious: Obama says of ISIS, “We don’t have a strategy yet.” 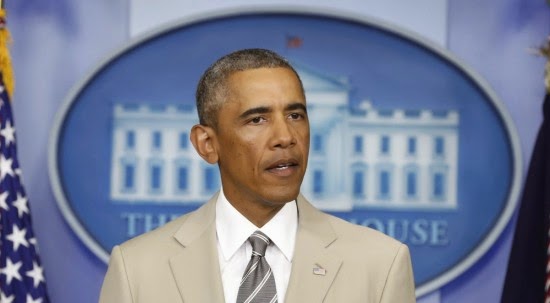 These animals have crucified children, beheaded Americans, committed mass murder of prisoners of war, raped women and sold them into slavery, killed tens of thousands and taken over a large chunk of the Middle East. What the Hell is Obama waiting on?


President Barack Obama addressed a pair of escalating world crises Thursday afternoon, blaming Russia for escalating violence in eastern regions of Ukraine and discussing a still-developing strategy to confront the extremist group calling itself the Islamic State in Iraq and Syria. [...]
Obama is also scheduled to meet Thursday evening with members of his National Security Council, as well as Vice President Joe Biden, on a strategy to further confront the extremist group calling itself the Islamic State (also ISIS or ISIL) in Iraq and Syria. A White House official said no new decisions are expected on how to proceed Thursday.
“I don’t want to put the cart before the horse,” Obama said, when asked about the next steps in confronting the group. “We don’t have a strategy yet.”
Keep on reading…