Write a high school fictional story about shooting a dinosaur? That's an arresting. 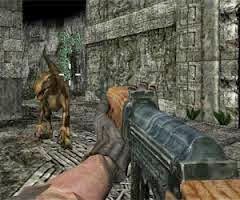 If he had also chewed a pop tart into a gun shape, the SWAT team would have showed up with armored vehicles, combat gear and automatic weapons..


The student, Alex Stone, was assigned by a teacher to write a story about himself. Stone chose to embellish his story with obviously fictional details, like dinosaurs. But the teacher saw the word "gun" and the rest is history, according to NBC-12:


Stone said in his "status" he wrote a fictional story that involved the words "gun" and "take care of business."
"I killed my neighbor's pet dinosaur, and, then, in the next status I said I bought the gun to take care of the business," Stone said.
Stone says his statements were taken completely out of context.
"I could understand if they made him re-write it because he did have "gun" in it. But a pet dinosaur?" said Alex's mother Karen Gray."I mean first of all, we don't have dinosaurs anymore. Second of all, he's not even old enough to buy a gun."
Investigators say the teacher contacted school officials after seeing the message containing the words "gun" and "take care of business," and police were then notified on Tuesday.


The police arrested Stone and charged him with disorderly conduct. He was also suspended from school for a week.