Obama speaks to American Legion. Vets sit on their hands. 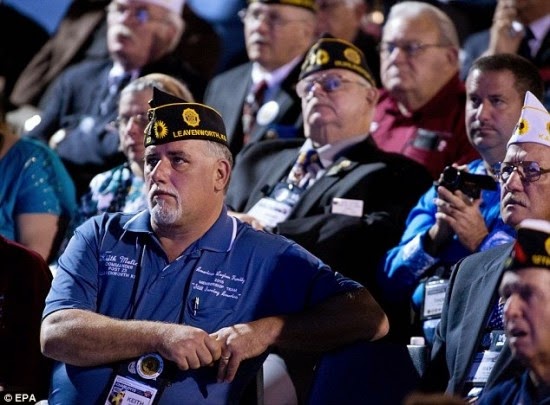 It was classy of them not to boo him off the stage.


President Barack Obama faced a tough crowd on Tuesday – American military veterans – and fell flat on his applause lines as he failed to win over the American Legion’s convention-goers.
His 35-minute speech seemed to have reminded the audience of the stark divide between the White House’s policy choices and the feelings of the men and women often called on to carry them out.
A Virginia legionnaire who served in the U.S. Marine Corps told MailOnline that ‘a small group of Obama’s admirers – and there are some here – sat near the front and tried to generate applause for him about 10 times.’
‘They didn’t get much pickup,’ the retired lieutenant colonel said of the ‘instigators’ gathered at the Charlotte, North Carolina event, but ‘they were persistent. You could tell when the applause was genuine and when it wasn’t. It was obvious to everyone here.’
Most of the veterans sat on their hands, leaving awkward silences where White House speechwriters expected ovations.
Keep on reading…