Russia is invading the Ukraine and the US and UN are looking the other way... 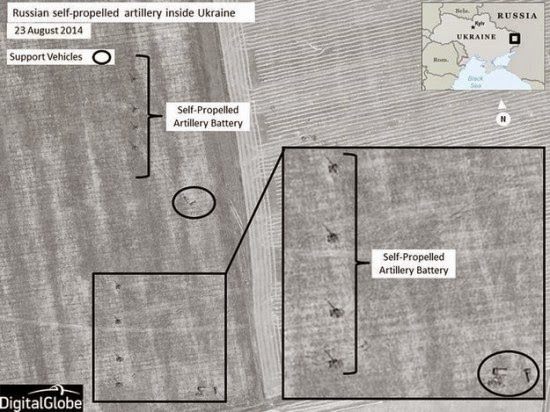 It doesn't seem the sanctions slap on the wrist Obama put on Russia has gotten their attention.

U.S. officials are refusing to call Russia’s ongoing invasion of Ukraine this week an invasion, and the issue is not on the agenda for Thursday’s National Security Council meeting.
“Today the president is meeting with his National Security Council to discuss the situation in Iraq and Syria, our ongoing efforts to support the Iraqi government, and our efforts to counter the threat posed by ISIL,” a White House official said on Thursday when asked if the situation in Ukraine would also be a part of the meeting. “You should not expect that we’ll have new decisions to announce on these issues today.”
The meeting will include heads of intelligence agencies, Secretary of Defense Chuck Hagel, Vice President Joe Biden, and Secretary of State John Kerry, the three of whom plan to join remotely. The meeting is expected to include discussion of whether or not the U.S. will carry out strikes against the Islamist terrorist organization ISIS inside Syria.
Russian combat troops are currently inside southeastern Ukraine. NATO released satellite imagery showing this on Thursday. “The satellite images released today provide additional evidence that Russian combat soldiers, equipped with sophisticated heavy weaponry, are operating inside Ukraine’s sovereign territory,” NATO Brigadier General Nico Tak said.
Keep on reading…