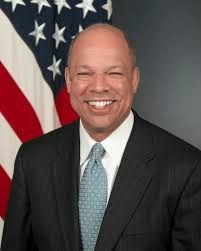 That's because there isn't any.


(CNSNews.com) – When asked to do so at a Thursday press briefing, Homeland Security Secretary Jeh Johnson failed to cite any law that authorized President Barack Obama to give Social Security Numbers to illegal aliens.
CNSNews.com asked Johnson: “A federal court in Texas v. United States has said giving an illegal alien a Social Security Number is not an act of prosecutorial discretion. What specific law gives the president the authority to give a Social Security Number to a foreign national in the country illegally?”
Rather than answer the question, Johnson instead noted that the administration has appealed the court’s injunction against the administration’s unilateral action on immigration.
He said: “Well, that’s a case that’s on appeal right now. We disagree with the district court’s decision but that’s what appellate courts are for. We’ve appealed the decision. We’re asking for a stay of the injunction. We went to the district judge first and the matter will be resolved in a few days. So that’s in litigation. I believe that the injunction will be reversed in a matter of time.”