Ruh-Roh! "There is potential criminal activity" relating to nondisclosure of Lois Lerner emails 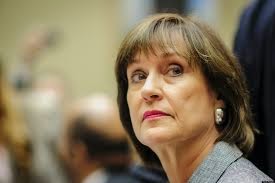 Lock'em up and throw away the key.


The IRS initially told lawmakers that emails from Lerner, the former official at the heart of the Tea Party targeting scandal, were lost. But many Lerner emails were found despite claims from officials that they were not backed up.
"There is potential criminal activity," Timothy Camus, the deputy inspector general for investigations, told the House Oversight Committee at a late Thursday hearing, according to reports.Treasury Inspector General for Tax Administration J. Russell George and Camus, his deputy, told the Oversight panel they were also working with recovered hard drives from IRS email servers that could contain additional emails. But it is unclear whether that data can be recovered.
The investigators learned earlier this month that there were over 400 additional back tapes that may contain Lerner's emails from a crucial period in 2011. According to reports, the IG's office was not notified about those backups, which took them only two weeks to find.
The officials learned about the back-up tapes after demanding additional documents that IRS had not initially shared. One of those documents made clear that there were hundreds of other tapes.
“We were following up on our initial interviews, we realized we were missing a document. When we obtained that document and reviewed it, we realized that there were an additional population of tapes that had been unaccounted for,” Camus told lawmakers.