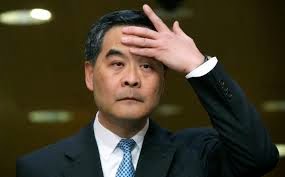 Hong Kong’s unpopular chief executive has infuriated pro-democracy campaigners by using a Chinese New Year message to urge the former colony's citizens to act more "like sheep".
In a brief video address commemorating the start of Year of the Sheep, CY Leung said sheep-like behavior was required in the wake of the turbulence caused by last year’s street protests.
“Last year was no easy ride for Hong Kong. Our society was rife with differences and conflicts,” the chief executive of the former British colony said.
“In the coming year, I hope that all people in Hong Kong will take inspiration from the sheep's character and pull together in an accommodating manner to work for Hong Kong's future.”