Eric Holder see no reason to use Islamic when referring to ISIS terrorists... 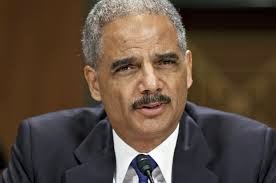 He also criticized Fox News for pointing out the truth.


Tuesday at the National Press Club in Washington, D.C., while commenting on controversy over the Obama administration’s refusal to call ISIS radical Islamic terrorists, Attorney General Eric went after Fox News Channel for even discussing it.
Holder said, “We spend more time, more time, talking about what do you call it, as opposed to what are you going to do about it. I mean really, if Fox News didn’t talk about this, they would have nothing else to talk about, it seems to me.  Radical Islam, Islamic extremism,  I’m not sure an awful lot is gained by saying it. It doesn’t have any impact on our military posture. What we call it doesn’t have any impact on the polices we put in place.”
“The terminology, it seems to me, has little to no impact on what ultimately we have to do.” he concluded.

Eric Holder should also oppose hate crime laws based on his above position. After all, not an awful lot is gained by naming a murder a hate crime. It's already against the law to murder someone.
Posted by Bluegrass Pundit at 5:58:00 PM