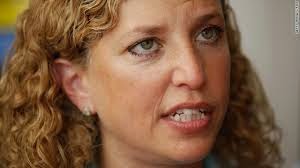 If Chris Christie did this, there would be another federal investigation.


South Florida Rep. Debbie Wasserman Schultz’s office is claiming her appearance at the Grammy awards Sunday wasn’t a just a junket for a star-struck politician dying to rub elbows with the glitterati.
It was a research trip, paid for by the congresswoman’s campaign funds.
hat’s the story being spun by Wasserman Schultz’s office, anyway, after a New York Times reporter posted a photo of the Democrat in the background of a television standup – a photo that rocketed around the Twitter world. (The presence of Texas Democrat Sheila Jackson Lee in the same photo helped.)
Since it’s easier to keep a straight face by email, Wasserman Shultz communications director Sean Bartlett had no problem passing this spiel to the Sun-Sentinel (subscription required.)
“[Wasserman Schultz] was in Los Angeles to attend a series of official and political events during Grammys weekend and at the Grammys, where she joined her colleagues on both sides of the aisle in learning more about pressing issues before the music industry as Congress prepares to take up related legislation.”
Bartlett told the Sun Sentinel that Wasserman Schultz used campaign funds for the trip — not official, federal money to listen to her favorite stars, up close and personal.[…]