Actual Good News: Utah may bring back the firing squad for executions... 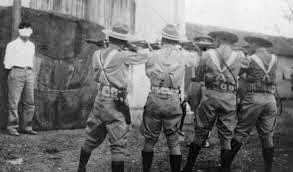 I believe firing squads are fast, effective and humane. Lethal injections have been botched lately. It's hard to botch a firing squad; assuming you use enough marksmen art a short range.


A hotly contested proposal that resurrects Utah’s use of firing squads to carry out executions narrowly passed a key vote Friday in the state’s Legislature after three missing lawmakers were summoned to break a tie vote…
Rep. Paul Ray, a Republican from Clearfield who is sponsoring the measure, said after the vote Friday that he thinks it will be just as close in the Senate, and he hasn’t started trying to press his case in that chamber…
Ray argues that a team of trained marksmen is faster and more humane than the drawn-out deaths that have occurred in botched lethal injections. His bill would call for a firing squad if Utah cannot get lethal injection drugs 30 days before an execution.
Critics say the firing squad is a gruesome relic of Utah’s Wild West past and would bring international condemnation upon the state. That criticism and excessive media attention was one of the reasons many lawmakers voted in 2004 to stop allowing condemned prisoners to choose death by firing squad.