Outrage: Illegal aliens who didn't file taxes can get refunds when they get Social Security numbers 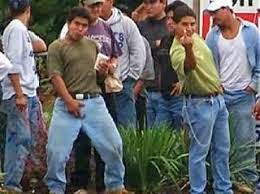 If only Republicans had the balls to stop this...


IRS Commissioner John Koskinen told Congress on Wednesday that even illegal immigrants who didn’t pay taxes will be able to claim back-refunds once they get Social Security numbers under President Obama’s temporary deportation amnesty.
The revelation — which contradicts what he told Congress last week — comes as lawmakers also raised concerns Mr. Obama’s amnesty could open a window to illegal immigrants finding ways to vote, despite it being against the law.
“While we may disagree about whether your deferred action programs were lawfully created and implemented, we are confident that we can all agree that these programs cannot be permitted to impair the integrity of our elections,” Republican members of Congress from Ohio wrote in a letter to Mr. Obama Wednesday, ahead of a hearing on the issue in the House on Thursday.
Mr. Obama’s new deportation policies, which carve most illegal immigrants out of danger of being removed, and could proactively grant as many as 4 million illegal immigrants work permits and Social Security numbers, are increasingly under fire for ancillary consequences such as tax credits and competition for jobs.
Keep on reading…