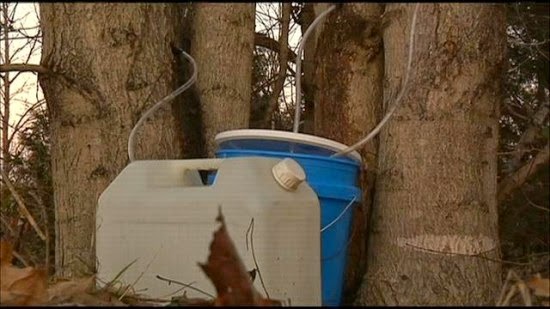 Apparently, the idiots thought it was a meth lab. The family was lucky the agents didn't get a no-knock warrant and bust in their house in the middle of the night. Several people have been shot or killed on those raids.


A Union County family got the scare of their lives on Wednesday morning as drug agents swarmed onto their property.
“I heard the dogs barking. And I knew that meant somebody was outside the house,” said Laura Benson. “And I looked out the windows and I seen a truck coming up the driveway fairly fast. And an Anna police car right behind it.”
At first, Laura says she thought her son had done something wrong. Then she says she couldn’t believe her ears when she heard the drug agents say this.
“They had a report of a meth lab going on on our property. And they wanted to investigate it.”
So the Benson’s gladly showed the officers what they really were doing, which was making their own maple syrup.
“They pointed to the buckets and I told them my husband has a hobby of making maple syrup. Of course they realized it once they seen it,” said Laura. “But I was quite startled this morning.”

Keep reading
Posted by Bluegrass Pundit at 5:35:00 AM