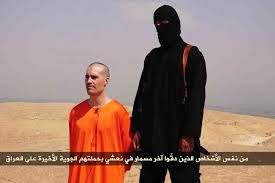 
WAPO: ‘Jihadi John’: Islamic State killer is identified as Londoner Mohammed Emwazi LONDON — The world knows him as “Jihadi John,” the masked man with a British accent who has beheaded several hostages held by the Islamic State and who taunts audiences in videos circulated widely online.
But his real name, according to friends and others familiar with his case, is Mohammed Emwazi, a Briton from a well-to-do family who grew up in West London and graduated from college with a degree in computer programming. He is believed to have traveled to Syria around 2012 and to have later joined the Islamic State, the group whose barbarity he has come to symbolize.
“I have no doubt that Mohammed is Jihadi John,” said one of Emwazi’s close friends who identified him in an interview with The Washington Post. “He was like a brother to me. . . . I am sure it is him.”