Hillary Clinton wants to run as the candidate with girly parts... 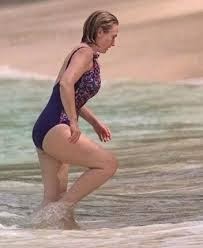 I hate to quote Hillary, but "What Difference, At This Point, Does It Make?"


After a relatively quiet public schedule this year, Mrs. Clinton planned to deliver a paid speech at a women’s conference in Silicon Valley on Tuesday—the first in a series of addresses in the coming weeks focused on women. Ever since the birth of Charlotte Clinton Mezvinsky, in September, Mrs. Clinton has infused her public comments with references to being a new grandmother.
And some of her longest-serving advisers are open about their intention not to repeat what they see as one of their most crucial mistakes from the 2008 primaries. Ann Lewis, a senior adviser in that race, called the decision not to accentuate Mrs. Clinton’s gender—which ceded the mantle of barrier-breaker entirely to Barack Obama—the “biggest missed opportunity” of that primary contest. “It was not a major theme of the campaign,” Ms. Lewis said.
“I think she clearly understands this time the significance of having a woman president of the United States,” said Gov. Terry McAuliffe of Virginia, who served as Mrs. Clinton’s campaign chairman in 2008. He added that Mrs. Clinton’s gender was “a tremendous asset.”
The decision to run more emphatically as a female candidate is rooted in a strategic assessment of the demands of this campaign and of a changing country. With Republicans determined to portray Mrs. Clinton as an aging relic—she will turn 69 just before Election Day next year—her supporters believe her campaign offers a powerful rejoinder to the charge that she does not represent change.