Obvious: Obama's DOJ will not prosecute Lois Lerner for contempt of Congress. 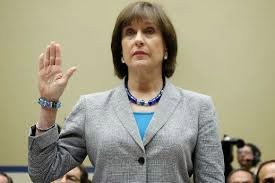 I bet they are privately give her attagirls...


The Justice Department will not seek criminal contempt charges against former IRS official Lois Lerner, the central figure in a scandal that erupted over whether the tax agency improperly targeted conservative political groups.
Ronald Machen, the former U.S. attorney for the District of Columbia, told House Speaker John Boehner (R-Ohio) in a seven-page letter this week that he would not bring a criminal case to a grand jury over Lerner’s refusal to testify before the House Oversight and Government Reform Committee in March 2014. The House approved a criminal contempt resolution against Lerner in May 2014, and Machen’s office has been reviewing the issue since then.