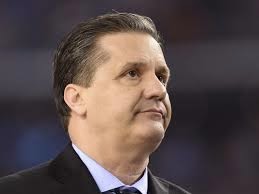 UK Coach John Calipari needs to shut up and coach. He doesn't need this distraction and it could be divisive for UK fans.


Early today, the National Association of Basketball Coaches facilitated a conference call between the four coaches playing this week in the 2015 NCAA Men’s Final Four in Indianapolis to discuss concerns expressed regarding the Indiana Religious Freedom Restoration Act.
On the call, the four coaches – John Calipari of the University of Kentucky, Tom Izzo of Michigan State University, Bo Ryan of the University of Wisconsin and Mike Krzyzewski of Duke University – were in unanimous support of the policies expressed by their institutions and the National Collegiate Athletic Association (NCAA).
The following is their statement.
“We are aware of the recent actions in Indiana and have made a point to talk about this sensitive and important issue among ourselves and with our teams. Each of us strongly supports the positions of the NCAA and our respective institutions on this matter – that discrimination of any kind should not be tolerated. As a part of America’s higher education system, college basketball plays an important role in diversity, equality, fairness and inclusion, and will continue to do so in the future.”