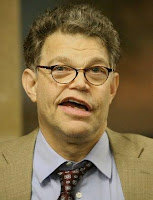 The Wall Street Journal explains how Al Franken stole the election in the Minnesota Senator's race. We knew this, but it is surprising to see the WSJ actually make the case. Half the residents of Minnesota should be ashamed for sending this joke to Washington.

The Minnesota Supreme Court yesterday declared Democrat Al Franken the winner of last year's disputed Senate race, and Republican incumbent Norm Coleman's gracious concession at least spares the state any further legal combat. The unfortunate lesson is that you don't need to win the vote on Election Day as long as your lawyers are creative enough to have enough new or disqualified ballots counted after the fact.

Mr. Franken trailed Mr. Coleman by 725 votes after the initial count on election night, and 215 after the first canvass. The Democrat's strategy from the start was to manipulate the recount in a way that would discover votes that could add to his total. The Franken legal team swarmed the recount, aggressively demanding that votes that had been disqualified be added to his count, while others be denied for Mr. Coleman.

But the team's real goldmine were absentee ballots, thousands of which the Franken team claimed had been mistakenly rejected. While Mr. Coleman's lawyers demanded a uniform standard for how counties should re-evaluate these rejected ballots, the Franken team ginned up an additional 1,350 absentees from Franken-leaning counties. By the time this treasure hunt ended, Mr. Franken was 312 votes up, and Mr. Coleman was left to file legal briefs.

What Mr. Franken understood was that courts would later be loathe to overrule decisions made by the canvassing board, however arbitrary those decisions were. He was right. The three-judge panel overseeing the Coleman legal challenge, and the Supreme Court that reviewed the panel's findings, in essence found that Mr. Coleman hadn't demonstrated a willful or malicious attempt on behalf of officials to deny him the election. And so they refused to reopen what had become a forbidding tangle of irregularities. Mr. Coleman didn't lose the election. He lost the fight to stop the state canvassing board from changing the vote-counting rules after the fact. (accent is mine)

And we need to keep reminding American and Minnesota that AL FRANKEN STOLE THE ELECTION. HE AND HIS DEMOCRAT CRONIES ARE CHEATS!

You know I have never liked this guy. Even when he was on SNL I would think to myself what a worthless, untalented panty waste. It was about that era I stopped watching.

To be fair, well under half voted for Franken.

I do agree the election was stolen and have blogged about it to the annoyance of some.