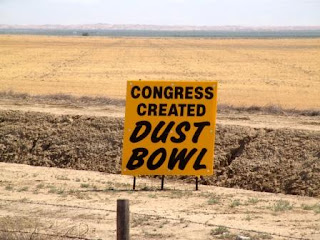 In what may be another backroom deal, two 'Blue Dog' Democrats from the Central Valley of California have affirmed their support for Obamacare. Water is rationed in California and the San Joaquin Valley have had their water turned off in order to protect a tiny fish called the delta smelt. This devastated the farming in the area and led to 41% unemployment in some areas of San Joaquin Valley. President Obama has been ignoring this travesty of justice. Now that votes are needed for Obamacare, the water allocation for this area has been increased and ,suddenly, two 'Blue Dog' Democrats have cleared up their indecision and moved into the 'yes' category. They even let the two new Obamacare supporting Congressmen help make the announcement of increased water allocation. This smells like vote buying.

Is this Another Backroom Deal to Force Obama’s Bill Down the American People’s Throats?

The U.S. Department of Interior announced yesterday that it is increasing water allocations for the Central Valley of California, a region that depends on these water allocations to support local agriculture and jobs. The region has recently been starved for water and as a result unemployment has soared. Not surprisingly, Cardoza and Costa had a hand in the announcement:

“Typically, Reclamation would release the March allocation update around March 22nd, but moved up the announcement at the urging of Senators Feinstein and Boxer, and Congressmen Costa and Cardoza.”(“Interior Announces Increased Water Supply Allocations in California,” U.S. Department of Interior news release, 3/16/10)

Two more votes bought! These people are trashing the Constitution and leading this Country into very dark days.

Good one, by the way I am a high school student and want a career in fashion. I am applying for admission to Beauty Schools of America, Miami. I heard that it’s a reputed school in the field of spa cosmetology and barber industries. Mostly people have to say only good things about Beauty Schools of America Complaints are hard to find. Can you refer some other good schools