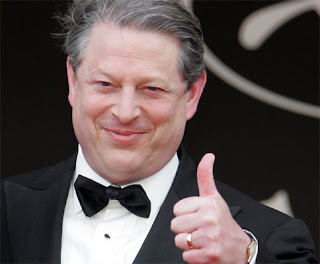 Al Gore wants to reduce CO2 emissions as long as it's someone else making the sacrifice. As for Al, he just bought a $9 million, six fireplace, five bedroom and nine bathroom villa on the California Coast. Saving the planet from global warming has it's privileges. Just saying...

Former Vice President Al Gore and his wife, Tipper, have added a Montecito-area property to their real estate holdings, reports the Montecito Journal.

The couple spent $8,875,000 on an ocean-view villa on 1.5 acres with a swimming pool, spa and fountains, a real estate source familiar with the deal confirms. The Italian-style house has six fireplaces, five bedrooms and nine bathrooms.