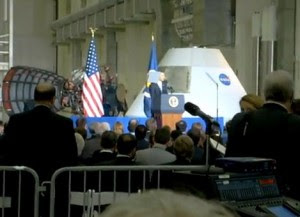 The NASA employees Obama double-crossed weren't allowed to attend his NASA speech. They might have been upset about Obama lying about protecting their jobs.

Obama traveled to Florida to speak to NASA. Except that he didn’t. NASA employees were not allowed to attend the speech. This only became known after it was leaked out during a live segment on MSNBC by Jay Barbree — the longtime NBC science correspondent.
Via Doug Ross:

BARBREE: …I’m a little disturbed right now, Alex. I just found out some very disturbing news. The President came down here in his campaign and told these 15,000 workers here at the Space Center that if they would vote for him, that he would protect their jobs. 9,000 of them are about to lose their job. He is speaking before 200, extra hundred people here today only. It’s invitation only. He has not invited a single space worker from this space port to attend. It’s only academics and other high officials from outside of the country. Not one of them is invited to hear the President of the United States, on their own space port, speak today. Back to you Alex.

We should have guessed it.