Confirmed: Crist Was a RINO (video) 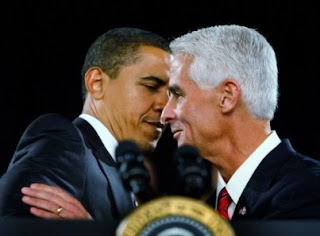 Crist Rules Out Running For Senate As Independent


FOX News is reporting Crist will come out an an Independent candidate Thursday.

Republican Florida Governor Charlie Crist has decided he will run as an independent in the race to fill the Florida U.S. Senate seat, Crist allies tell Fox News. The official announcement is scheduled for Thursday at 5pm ET in St. Petersburg, Florida.

The Senate campaign has been rough and tumble for Crist, he was once the front-runner -- but in recent months began trailing his GOP opponent, Tea Party favorite and former Florida State Speaker Marco Rubio. Rubio has been able to turn a 30-point deficit in the polls into a 30 point lead over Crist.

If the FOX News report is correct, Charlie Crist is a liar. No Florida voter should believe anything he promises.
Posted by Bluegrass Pundit at 6:13:00 PM

And this is a Surprise?