Pelosi Calls Murtha “a tireless advocate for our troops, and Marines in particular” 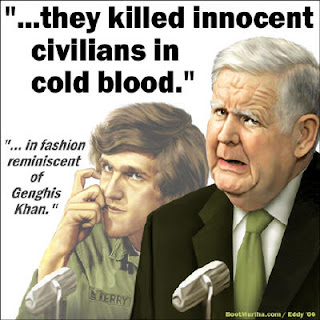 Nancy Pelosi was shameless in her praise for deceased Rep. John Murtha. Pelosi said Murtha was, “a tireless advocate for our troops, and Marines in particular.” John Murtha accused the Marines in the Haditha incident of killing Iraqi civilians "in cold blood" before the Marine Corps report was even issued. After charges were dropped against six and the seventh was found not guilty, Murtha refused to apologize or retract his statement. Here is a video of a reporter asking Murtha to apologize after charges were dropped against some of the Marines.

Murtha — “our dear Jack,” as Pelosi referred to him — deserved the honor as a tireless advocate for troops generally and Marines in particular, she said, and she recalled admiring his rapport with them.

“Whether on the battlefield, or on the bedside, he thanked them for their courage, listened to their concerns, and asked them for comment — and he answered their needs, and responded to their calls, whether it was for body armor, up-armored vehicles… radios, you name it,” Pelosi said. “In those minutes [together], he bonded with them especially because he would share his own personal military service with them, and cared for them as a father. They knew it, and they returned his respect.”