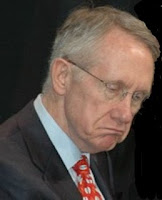 The latest Rasmussen poll still has Harry Reid's poll numbers at around 40%. Reid has been stuck below 50% for months. An incumbent who polls below 50% is considered to be at high risk of losing their job.

Senate Majority Leader Harry Reid’s support remains frozen again this month around 40%, while two of his chief Republican opponents continue to draw over 50% of the vote in Nevada’s U.S. Senate race.