Yahoo! News: Louisiana Attack On Republican Fundraiser may Be Political 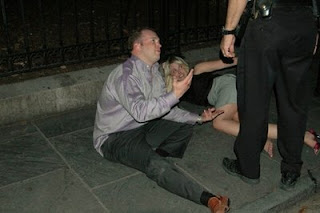 Pundits have been reporting the brutal attack on two Republican fundraisers in Louisiana was most likely political. Leftist thugs followed the Republicans from an event and brutally attacked them. The mainstream media is slowly coming to grips with this outrage.

Yahoo! News spoke to a friend of Allee Bautsch who’s been in communication with her since the attack. The friend, who declined to be named because the attackers are still at large, described the group who descended on Bautsch and Brown as “some weird Bobby Jindal protesters” there in opposition to the state’s governor. The friend confirmed the earlier reports that Bautsch “got caught in the middle” of the altercation as she tried to break it up. Bautsch’s friend also reported that she’s in “loads of pain” with “rods in her leg and ankle,” but that she was also “released yesterday from the hospital and is resting at her home in Baton Rouge.”

The latest seems to be that it was a tourist attack, not a political attack. They admit now they didn't hear what they first reported. From the AP:
Joseph Brown told police protesters were outside Brennan's restaurant during the Louisiana Republican Party event. But most had left about an hour before Brown and 25-year-old Allee Bautsch left the restaurant.

According to a police report obtained by The Associated Press on Friday, the 29-year-old Brown said a group of men yelled obscenities and taunted them, but he heard nothing suggesting the attack was politically motivated. Bautsch suffered a broken leg in the attack.

The police report does not say what the protest was about.

* Police report: No evidence of political motive in beating of Jindal staffer