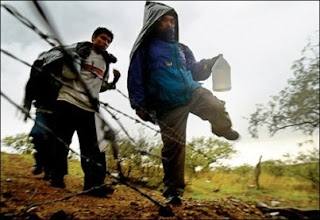 There is nothing like an effort to legalize millions of illegal immigrants to peek Democrat's interest in border security.

An outline of the proposal does not specify the additional agents or resources required to meet the benchmarks. It does suggest a two-phase system for legalizing people who are in the U.S. illegally.

Of course, Democrats don't really want border security. In 2006 42 Senate Democrats voted against a law to build a border fence. They wanted to consult Mexico.

Forty-two Democrats voted against legislation that would have built a border fence to stop the flow of illegal aliens and drugs across our borders. In fact, it was Democrat Christopher Dodd of Connecticut whose amendment was attached to the legislation that would require the U.S. government to consult with the Mexican government before building a fence along our southern border.

Just six months after Democrats took power in the House, 214 House Democrats voted against a Republican proposal to “provide the funds necessary for the construction of at least two layers of reinforced fencing, the installation of additional physical barrier, roads, lighting, cameras, and sensors pursuant to section 102(b)(1) of the Illegal Immigration Reform and Immigration Responsibility Act of 1986…”

If anyone falls for this bait-and-switch, they are a naive beyond belief.
Posted by Bluegrass Pundit at 7:27:00 PM

Don't believe a word of it.