Before I get liberal hate mail, I know he couldn't fly due to volcanic ash. However, going golfing instead of attending the funeral was in poor taste. He could have dropped by the Polish embassy to pay his respects or claimed he was quietly meditating on the loss in the Oval Office. Instead, President Obama went on his 32nd golf outing since taking office. As a reference, former President Bush went golfing 24 times in eight years. 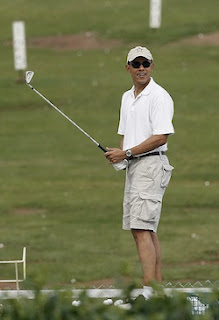