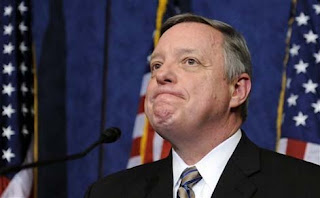 We have to wonder what this is about. Will Durbin rollover on Obama? Popcorn anyone?

Durbin discussed the subpoena during an appearance in Chicago on Friday — a day after Blagojevich's lawyers asked a federal judge to issue a subpoena to force President Barack Obama to testify.